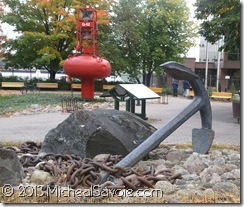 When my father died, I think I went through a period of severe disorientation. An anchor in my life had been cut loose and I was drifting with the current. In a way, I still am. But in February, I was more of a wreck than I appeared to the rest of the world.

So when I got a call from my old manager at Sam’s Club offering me a part time job, I took it. It was different anchor that forced me to get up in the morning and gave me some structure in my life that I had not had for a while. But with everything, there is a price that must be paid, and the price for me was my business. I was earning a significant amount from posting Warrior Special Offers and New WordPress Plugins on WPPluginGuide prior to getting the job. Since I no longer had the time to post new offers on a consistent basis, the traffic to those sites dropped and the sales slowed to a trickle. So by renting myself out to Sam’s Club, I found myself losing money.

Yet I was finding it difficult to cut away this new anchor. I would fight management on a daily basis because I was getting scheduled on Sundays (family and football day) and they were scheduling me 5 days for 20 to 32 hours. It really irritated me driving 42 miles one way to work 4 hours. Yet the anchor was still attached.

It took an incident that was totally out of character for me to finally break through the anchor’s lines and cut it completely. I was told to go work an area of the club that is physically difficult for me because of my arthritis. I have done it before without question when asked nicely. But I was told by a 20 year old co-worker who had not even been working there as long as I had been. And I totally went against every fiber of my being and rebelled to the point that I told him I was not going to do it and then went to management.

All would have been well, though, if management had followed through immediately. But management is one of those jobs that puts so much on the plates of the people who choose to take them on that they do not have (or make) the time to go talk to the people they need to until it is too late. It wasn’t until I walked in and told the manager in charge that I was giving him my 30 day resignation that he finally took action.

I had gone to him earlier and asked if the co-worker was my supervisor, because being ordered to go work where it physically hurt me was not something I was going to do without being warned about it ahead of time. He and the supervisor for the evening agreed that I should continue working my regular area and for me to tell my coworker that he had said that the coworker should work the area that he had told me to work.

I told the coworker that the manager had said the I was working my area and that he should be doing the other area. At that point, if the coworker would have just gone ahead and done the job, all would have been well, but he decided to do anything else that needed done EXCEPT for the area that he was supposed to be working. So toward the end of the shift, the manager and supervisor were discussing the state of the club on the radio and realized that nobody had been working the dreaded area that neither I nor the coworker wanted to work.

At that point, the supervisor called everyone over to that area so that we could work it as a team. And again, if the coworker in question would have chipped in, I might not have cut the anchor line… but he chose that moment to go work with paper products. Which left the rest of us to work an area that should have been done by either the coworker or myself. In retrospect, I think I was close to going over and doing it just so the rest of the team would not have to, but once I heard the manager and supervisor discussing it on the radio, it really cemented the deal, because that should not have been a surprise had they been paying attention.

That is the point when I walked in on the manager and told him I was resigning and stormed back out.

I have to question my motives that evening. Did I rebel because someone younger than me was giving orders? Almost all supervisors are younger than me, but this kid was not a supervisor (yet). He is today, as his promotion took effect at midnight tonight… but why should it bother me? Part of it is the fact that I know what being a leader is all about, having supervised in the past. It is putting the team above yourself. I was not being a leader last night. But neither was the kid, who used his up and coming position to wield power he did not know how to control. One does not order people to do things, one asks people to do things. One listens to others (like when I told him that it physically hurt me to do that job) rather than ignore it. (Later on, he was still telling the manager and supervisor that I had not told him that it was painful for me to do that job)… and one jumps in and does a job when the team needs a job done, especially when the rest of the team is forced into it. His choosing to do the paper towels and toilet paper instead of joining with the rest of us showed me that his leadership skills were questionable.

I am not perfect (I learned that many moons ago) but I also know everyone believes I am. It is something I have worked hard to perfect… try to predict what someone is going to need and then take care of it for them. That is why customers have always looked for me to help them. That is why other associates are happy to see me scheduled with them. My uncharacteristic turn toward anarchy appears to have come out of nowhere, but I think it came from the birth of my 2nd granddaughter, Kylie, who made her mommy work hard to bring her into this world.

She became one of my new anchors. She and Chloe, my granddaughter from 15 months ago have replaced the anchor I lost with my father. I believe it took two little anchors to replace the strong and sturdy one that my father had been in my life. The last 5 years of his life, I had been there when he needed me, because I had released Sam’s Club from my life back in 2008.

Anchors are important, because they steady us when the storms are brewing and keep us from drifting away aimlessly when we are at rest. I plan on refocusing my energy into some positive areas where I will impact people who need help building a business or growing an income stream to help them replace a job. Some anchors are good, like the family ones, but some anchors are keeping us from enjoy life. When the anchor line becomes too rigid and cannot be adjusted with the tide, it can actually pull a ship below the surface and sink it. I believe that at first, Sam’s Club, as an employer, was a good anchor, but now it has become a harmful anchor. Luckily, I cut the anchor loose in time (again)!

Keep The Taxman Out Of YOUR Wallet