I just watched a 3 minute video that really made me think… is your dream a one shot dream?

Are you willing to stake your life on your dream?

Dreams are obviously very powerful. They can drive you to work harder than anyone else, lose sleep to get more done and stay upbeat in the face of struggles that would make mere mortals cry like a baby. 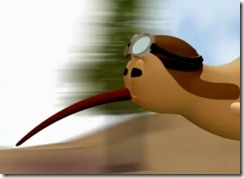 Enter Kiwi. A bird who has dreams of flying, and his vision is driving him to work hard. Spoiler alert: Watch the video now, because I am about to reveal what happens.

Have you watched it yet?

Ok. Kiwi is working hard; at first you wonder what the heck he is doing. Then as you see him put the finishing touches on his handiwork, you start to see the bigger picture. He is nailing trees to the side of a cliff. And this is one humdinger of a cliff, too.

When he looks down, you can’t see the bottom, because of the fog, but it has trees dotted all along the cliff as far as the eye can see.

When he is finally finished looking down, he takes a running start and dives off the cliff, and imagines himself flying past all the trees, his dream finally realized.

As he plunges to his eventual death…

And isn’t that what we are in danger of doing when we build dreams that are not realistic?

Kiwi wanted to fly. He never looked at ways he could actually fly, instead he chose an easy, one way ticket way to fly. It wasn’t easy in the sense that he had to work hard to get it done, but he could have invested his energy on a catapult, a rocket pack or any of a dozen ways to fly inspired by Wile E. Coyote…

Having a mentor is the best way to get the best possible advice when you are setting your sights on a dream.

A Mentor can ask you the right questions. They can give you some options. They might even save your life.

Micheal Savoie began his writing career as a contributing author for Amiga World Magazine when the Commodore Amiga was in the midst of a confusing time in its product cycle. Micheal managed to get two stories into print, and then the Amiga vanished from the face of the earth. Undaunted, Micheal pursued his Microsoft Certified Systems Engineer certification and began to work online. After meeting some extremely brilliant marketers at jvAlert Live in Orlando, Florida in 2007, it became inevitable that Micheal would go all out into his marketing business. Now Micheal writes on his blogs, such as Resolve to Succeed, Product In A Weekend, Aggressive Affiliate Training School and My Blogging School. View more posts

This site uses Akismet to reduce spam. Learn how your comment data is processed.